Those in the lighting industry, or, more specifically, those studying the effects of light on health, know that workplace lighting has an impact on the health and productivity of employees. Most companies, however, rarely (if ever) make decisions about lighting upgrades based on these “human-related” factors. The question is, if companies could be provided with empirical evidence—relating to their specific workplace—that suggests a change in lighting would affect the bottom-line, would they move forward with a lighting retrofit project? 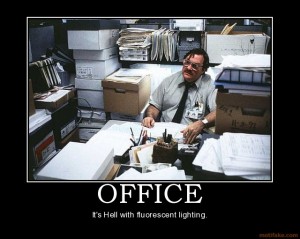 The World Green Building Council (GBC), a UK-based organization that campaigns for a sustainable built environment, believes that if companies are provided with the right information, they would. As such, they have created a toolkit, which collects data from the “physical, perceptual, and financial areas” of a company’s building and analyzes it to make the business case. Companies can then use the data extrapolated from the toolkit to effectively alter the “attitudes and output” of employees.

The GBC says often companies are already collecting vital information that can be used to improve worker output—such as absence rates, medical leave, and staff turnover to name a few—but they aren’t looking at the data correctly.

According to John Alker, Director of Policy and Communications GBC, “an effective perception study that tests a range of self-reported attitudes about health, wellbeing and productivity in the workplace can create a more rounded picture.” Then, information about the building and performance is gathered, including “very direct measures (lighting, temperature, air quality)” and “evaluations or assessments (quality of views, local amenities).”

The overall goal of the GBC is to provide companies with a means of collecting and analyzing data that clearly illustrates a link between lighting and employee productivity and health. Not only will lighting retrofits benefit companies in terms of an increase in employee productivity, but also in terms of energy savings by switching to more energy efficient lighting (such as LEDs) and more modern light schemes (such as the use of lighting controls and daylight harvesting).

As for the bigger picture, by eradicating buildings of old lighting technologies that use toxic materials (such as mercury) and put an increased strain on our energy resources, this toolkit can play a large role in improving the environment.

Would your company be more affable to a lighting retrofit if provided with empirical evidence to suggest employees could be more productive under different lighting?