If you look closely at the fine print in the technical datasheets or product boxes of lighting products, you will find reference to an ANSI specification C78.377-2008, which is associated with Correlated Color Temperature (CCT). This specification sets standards, or more specifically, tolerances, for color consistency among light sources. How these tolerances—what is considered an acceptable deviation in color temperature—are determined is through applying MacAdam ellipses.  In this blog, we will take a closer look at MacAdam ellipses and why the lighting industry uses them to define the color point specification of lamps. 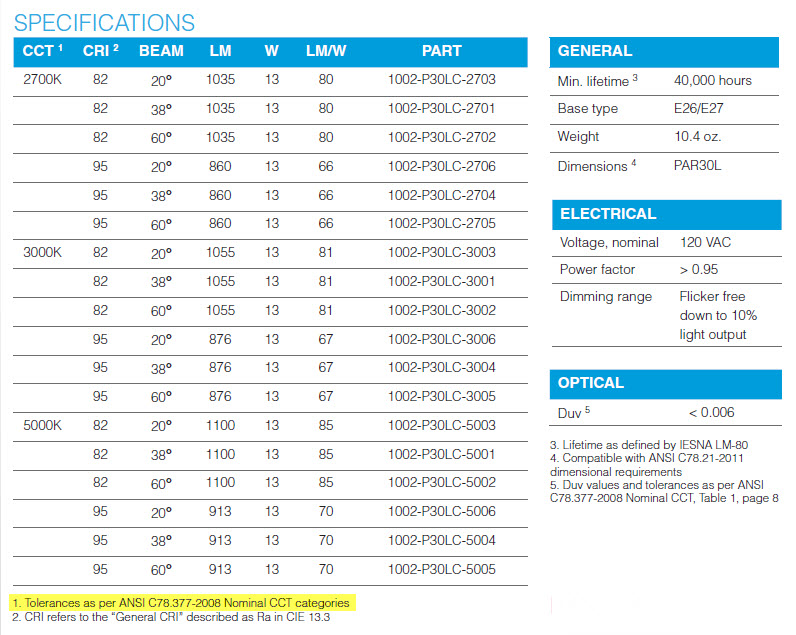 In the 1940s, David Lewis MacAdam, then a color scientist with Eastman Kodak, conducted color vision experiments with a small sample of individuals. The experiment aimed to measure how closely individuals could match one color against another, at a fixed luminance, by adjusting color controls—similar to RGB or CMY—starting from different color directions.

Based on the test results, MacAdam was able to create boundaries (or zones) around target colors. When plotted on the 1931 CIE xy chromaticity color space, the zones look similar to ellipses.  In total, MacAdam plotted 25 ellipses and within each ellipse there are many colors that look the same to the average observer.

Interestingly, not all ellipses were found to be equal. Depending on the test color, both the size and the orientation of the ellipses varied. For example, ellipses in the blue hues are smaller than those in the green (we seem to be more sensitive to blue color shifts). The size of the ellipses is based on standard variance called “steps”. A one-step MacAdam ellipse is when every point on the circumference is exactly one standard variance from the center point.

Remember the backlash about the poor color rendering of CFL light bulbs when first introduced? The US Department of Energy set a standard of 7 steps for CFL. For solid state lighting products such as LEDs, ANSI standard C78.377-2008 states that CCTs must be within 4 steps meaning, a much lower colour variance. This still does not suggest that all LEDs provide optimal or equal color precision. Some manufacturers, such as Leapfrog Lighting, fall within a 3 step ellipses.

For LEDs, which introduce far more complexity and many more variables than incandescent lighting, the MacAdam Ellipse color variation should matter a great deal to those who place light quality at the forefront. Think about how an art gallery, museum, showroom, retail store, or restaurant would look if color fluctuation in lighting was apparent to an observer? Color precision is extremely important.

Prior to buying any LED light bulb, check the manufacturer’s specifications to ensure the CCT meets the ANSI standard.  You should also inquire as to the manufacturer’s quality control with regards to their LED binning—ensuring one batch matches another.

One Response to LED lighting and the MacAdam Ellipse