A new survey from Leapfrog Lighting reveals upfront cost as the leading reason for delay in implementing LED lamps in the workplace, even though 81.9 per cent ultimately install or plan to install.

The new Leapfrog Lighting poll asked a randomized sample of 200 business owners and managers, “What is the main reason you delayed implementation of LED light bulbs in your workplace?”

“Upfront costs tend to be the main issue we run across with clients,” said Stephen Naor, CEO of Leapfrog Lighting, who commissioned the poll of random business owners and managers. “That’s not a surprise. It’s good to see that 81.9 per cent currently use or plan to use LED. As an industry, though, we should try to educate users on the overall value proposition. We’ve done a good job on educating users on the energy and long life benefits.” 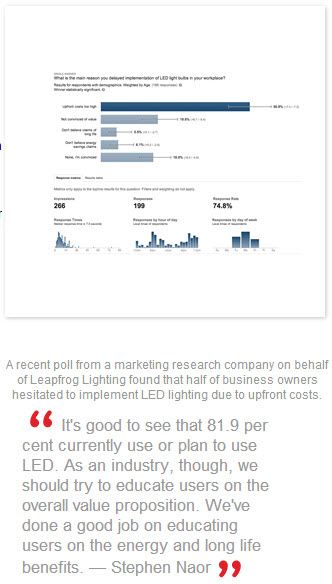 Since 81.9 per cent of those surveyed currently use or plan to use LED in their workplaces, the survey results suggest that upfront cost remains a temporary objection rather than a permanent obstacle. The 19.6 per cent who indicated they were “not convinced of value” may eventually be convinced with case studies or other value demonstrations. It appears that the majority of business owners are convinced of the claims of long bulb life and energy savings, a combined total of 11.6 per cent.

Interestingly, older cohorts were more likely to be convinced of the benefits of LED lighting; 38.9 per cent of respondents 65 years or older stated they were “convinced”, none (0 per cent) did not believe in the “energy savings claims” or “claims of long life” and only 27.4 per cent found upfront costs too high. Those aged 55–64 years also trended higher than average for “convinced,” and lower than average on “upfront costs” as an obstacle, at 45 per cent.

The age groups 35–44 and 18–24 years were most likely to pick “upfront costs too high” at 62.9 per cent. Both age groups were also less likely to choose “convinced.”

There was some deviation by lifestyle as well, with rural businesses less concerned with upfront costs, urban businesses just under average, but suburban respondents coming it at 58.1 per cent.

The US Northeast and Midwest were more likely to emphasize “upfront costs too high” while the US South and West were below average on the point. The US South was more likely to choose “not convinced of value” than other regional cohorts.

Download a 6 page report with all the research findings>>

The blind, randomized poll canvassed the opinions of 200 business owners and managers, a segmented cohort of a larger poll drawing 2,372 responses. Data were collected by a research company on behalf of Leapfrog Lighting. The poll is considered statistically accurate, subject to an error rate of 3.92 per cent. The poll has an average absolute error rate of 3.92 and a confidence level exceeding 95 per cent.

“Leapfrog Lighting intends to be the current and future benchmark in quality of light for years to come,” said Stephen Naor of Leapfrog.

← New Research Reveals That the Majority of Business Owners Use, or Plan to Use, LED Bulbs, Although Half or Them Delayed Due to Upfront Costs
LED lighting and the MacAdam Ellipse →